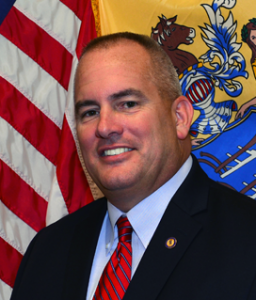 I had the opportunity to join Paterson Mayor André Sayegh, State Senator Joe Cryan, Assemblyman Benjie Wimberly and many others in a press conference in July to roll out new bail rules that make it easier to detain people charged with serious gun offenses.

The number of shooting victims in New Jersey is up more than 40 percent the past two years. We see it. Others only hear about it from the comfort of their homes.

Paterson is one of the five large cities in the state that has been most impacted. So when it was my turn at the podium, I thought of the words of wisdom from my dad. And I really tried. I looked at the mayor, the senator, the assemblyman, the many distinguished guests, and, for ALL of us, I said:

There is not a single person on this side of law enforcement in New Jersey or across the country who thought that this version of bail reform was a good idea. I say this version, because, without any question, this was NOT the version presented to us by the Christie administration when it was signed into law. We were told “low-level offenses” and minor warrants.

OK, that seems reasonable. I never wanted to arrest the person with the $200 traffic warrant on a Friday afternoon. I knew they’d be sitting in County for four or five days until they got to court. But then the national bail reform matrix comes into play. Distribution arrests? ROR’d. Gun possession? ROR’d. “Doesn’t fit the algorithm,” we were told. “Score is too low,” was the common answer.

“WHAT THE HELL?” became our response. What happened to minor offenses and BS warrants? Like some other important issues that administration promised, down the toilet it went.

Like everything else we deal with that gets shoved down our throats, we move along and do our jobs. We continue shaking our heads, here and nationally, as we watch crime and violence surge everywhere, including our state’s largest cities. In a nod to Mayor Sayegh, he got tired of burying innocent victims of gun violence and watching his city’s future leaders get snuffed out without a second thought by the violent gangs taking over his streets.

“Hopefully, it will have a major impact so that fewer families are mourning the loss of their loved ones,” Mayor Sayegh said.

It will, Mr. Mayor. It surely will.

I reminded the group what I heard that morning: “Bail reform is a moving document.”

Boy, I really hope that’s true, because you will all see that we have some more work to do. Otherwise, I’ll be there again to say, “We told you so!”

Turning to other news, our retirees will soon be getting their ballots to vote for the retired members trustee on the PFRS board. There are three candidates on the ballot. One is Bruce Polkowitz the endorsed incumbent candidate from PBA Local 600 and FMBA Local 500.

I cannot say anything about the other two candidates, other than that neither seems to be nearly as familiar with the PFRS system as Bruce. Not as much a criticism as a simple fact.

Bruce has been on the PFRS Trustee Board since its inception. He sits on many of the subcommittees and is respected by both labor and management sides of the board.

So our retired members have a simple choice: Start over from the very beginning with somebody learning the intricacies of the system and its entire board, or choose somebody with extensive knowledge of the entire system who has already started the discussion of how to responsibly restore the much-needed COLA.

I’ve only met one of the other candidates so far. Nice guy, to be sure, and a respected PBA member. But this is not the time to learn the immense complexities of the system and its board. This isn’t some kind of scorched-earth quest, as some might suggest. This is a mission to return COLA to our retirees.