National Honor Societies, Dean’s Lists and National Merit rolls had nothing on the group of overachievers hanging out in the Big Cypress Studio at the Hard Rock Hotel & Casino in Atlantic City on June 28. In a few minutes, these 43 incomparable children of law enforcement officers would matriculate through a processional culminating with receiving NJ State PBA scholarships.

Meeting these kids before all that pomp and circumstance transpired provided a monster dose of faith in America’s youth. At least the ones who have grown up with mom or dad – or both – on the job. Kids who have learned lessons from watching their parents go above and beyond to embark on lives that will go even further above and beyond.

Kids like Ryan Freeman. Freeman’s father Ronald served with Passaic City and was a Local 14 member for 16 years. His partner on patrol was a young Passaic officer named Marc Kovar. Ronald passed away on May 28, 2012, 10 years and a month ago to this day.

Sharon Freeman shared that every aspect of Ryan reminds her of Ronald, but especially his focus and drive. Ryan will use his scholarship to help him pursue a degree in mechanical engineering at Rutgers. At Passaic County Technical Institute, Ryan won the Engineering Club competition by building an underwater robot.

But Ronald would probably most proud of Ryan for earning the school’s Unsung Hero Award given to a student who performs good deeds in the community without any recognition. Ryan confided that he was here to represent his father and his family, praising some of the lessons he learned from Ronald.

“To be strong, to be myself and don’t let anybody keep me from reaching my goals,” Ryan explained. “I know he would be proud of me for focusing and making sure I get the job done.”

Or kids like Angela Bojtos. Her father, John, has been a Bound Brook Local 380 member for more than 28 years. His father served as chief in Bound Brook.

Angela will be using her scholarship at the University of Rhode Island where she will major in criminal justice and criminology. No, she does not want to be a law enforcement officer, but Angela says she wants to “do something in the field to honor my father and grandfather.”

She added how growing up with a father on the job as has made her a more caring person, the one in her friend group who looks out for everybody else. That’s the family legacy John sees Angela perpetuating.

“That you don’t need medals to be a good person,” John added. “That you can find something good to do for someone every day. You don’t need to kick in a door, but just be a helpful hand for people that are in need.”

Or like Sydney Hamer, whose father Ted is s retired Edison Local 75 member. Sydney was awarded the Elkes Scholarship, the annual award noted PBA benefactor Jacob “Josh” Elkes makes to a member’s son or daughter who exemplifies the sacrifice the kids make with having a parent on the job.

Sydney will be attending the Culinary Institute of America in New York, where she will study to become a pastry chef. According to Ted, Sydney began baking her famous banana bread for her father’s squad before she could walk. She evolved those to banana bread muffins. And she once received a very humbling thank-you note from Local 75 members when she made them carrot cake cupcakes.

“He always made me proud when he goes out there on the job,” Sydney declared. “So I feel honored just to be here today.” 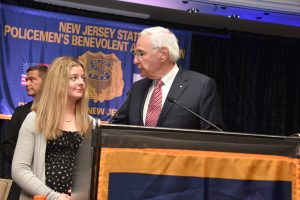 All 43 recipients Parsippany-Troy Hills Local 131 State Delegate Dave Cavaliere called out have similarly magnificent records of academic, athletic and extracurricular accomplishment. From football state champions to Quiz Bowl champions, from National Merit Scholar qualifiers to qualifiers for the U.S. swimming nationals, these are kids who have been motivated by seeing mom or dad do it every day no matter what.

“They learn in the household and it’s just something they want to be part of as well,” confirmed Middletown Township Local 124 State Delegate Anthony Dellatacoma, who served on the PBA Scholarship Committee.

Dellatacoma noted that the caliber of applicants and the essays they wrote compelled the committee to look way beyond test scores when determining the awards.

“You’re thinking about participation in clubs and sports,” he continued. “But a big thing with these kids is the way they volunteer in the community. Their community service mirrors what we do but on a different level.”

The daughters and sons of law enforcement officers have to excel on a different level because they are expected to meet a higher standard. Perhaps that is because their parents sometimes have to deal with the worst in society, so the kids are instilled with a greater appreciation in life.

Perhaps that is because if they earn that PBA scholarship, which might mean two or three fewer road jobs their parents have to work. And that can mean more time mom or dad can spend with the family.

Alex Han has dealt with double the amount of pressure. A recent graduate of Oratory Prep in Summit, Alex’s father, Paul, is a Union County Prosecutor’s Local 250 member. His mother, Danielle, is a Division of Criminal Justice Detectives Local 383 member.

Obviously, Alex has inherited the service gene and will nurture it having been accepted into Quinnipiac University’s prestigious Physician’s Assistant Studies six-year dual-degree program. Alex brings a “don’t settle for anything less” intensity to his academics spawned from seeing his parents on the job.

“They are risking their lives to come out on top of situations,” Alex submitted. “I just think that’s something that needs top be appreciated more in our country right now.”

If these kids are the future, then the future looks bright. That’s because of kids like Nick Venettone, whose father, Jack, retired after 33 years as a Raritan Township Local 339 member. Nick is going to Catholic University in Washington, D.C. where he will play football and major in criminology. He plans to follow in his father’s footsteps for one major reason.

“I always like doing everything the right way,” Nick stated.

The future is in good hands because of kids who earned this scholarship like Kasey Sles. After having qualified for nationals as a high school swimmer in Brick, she will be continuing her career at Monmouth University.

And Kasey in intent on following the path of her father, Montgomery Township Local 355 State Delegate Joe Sles, renowned throughout the state as one of the hardest-working men in the PBA business.

“I feel honored because of his hard work and dedication,” Kasey said about her dad. “He puts everything into it. His work ethic is amazing.”